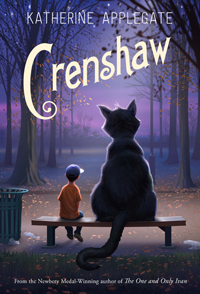 Crenshaw is a cat. He’s large, he’s outspoken, and he’s imaginary. He has come back into Jackson’s life to help him. But is an imaginary friend enough to save this family from losing everything?

Crenshaw is 9 year old Jackson’s imaginary friend. Jackson is too old for imaginary friends, and yet, Crenshaw is there to help him through the possibility of becoming homeless again. Reality is difficult which is why Crenshaw the cat is with Jackson to help him through these troubling times.  This book does a phenomenal job of being engaging and fun despite material that could so-easily delve into dark and disturbing.  Uncertainties frighten and anger Jackson. He prides himself on his scientist-like thinking, and that’s what he wants to be when he grows up–a scientist. But, like most kids in a family with some serious problems, he has limited time to think about his future. His dad was once a successful construction worker who was diagnosed with multiple sclerosis, and could only take part-time jobs after that time. His mother was once a middle-school music teacher, until her job was eliminated, and she then started working up to three part-time jobs at a time. Unfortunately, all that part-time work never seemed to add up to full-time wages, and, once again, Jackson’s family was looking at the possibility of having to live in their van. Narrated in first person by Jackson, “Crenshaw” is an extremely personal and very realistic story. Chapters are short and easy to read. Language is appropriate for the target age group – 8 to 12-years old – and some of the situations involving Jackson’s family may be relatable to those children. The aspects of this novel that may be personally unfamiliar to many of those young readers involve the situations involving homelessness, job loss, and chronic, debilitating illness.  Wonderful writing with a powerful message!