I’m a in love with learning. I’m happiest when I’m figuring out how to do something new. Sometimes that means I know just enough to get myself in serious trouble. Generally, it means I’m looking at something and thinking of how I could make it myself, better, and on the cheap. That’s probably how I wound up being a writer who draws, bakes, binds books, and does calligraphy.

Erika:  I’ve always been writing. I recently unearthed a pot boiler thriller I wrote in the third grade. I didn’t start pursuing writing as a career until my twenties. Final edits on The Book of Speculation were completed in 2014, though you never really stop working on a book. Every time you pick it up to read, you change a word. I’m still writing it, though no one’s paying attention to my little edits.

Sierra:  Tell us a little bit about your first book or the first book in the series.

Erika:  The Book of Speculation is about a librarian who receives a mysterious book that reveals a curse that’s been killing women in his family for 250 years, including his mother. His sister is poised to be its next victim. It follows Simon as he tries to break the curse, and his ancestors—a mute tarot card reader and a carnival mermaid—who live and work in a traveling circus in the 1790s. It’s a book about the magic of books and families. 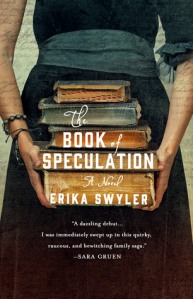 Sierra: How did you choose the genre you write in?

Erika:  I tend not to write in a single genre, instead pulling elements from many. I like the romanticism of fantasy, the pacing and thought that comes with mystery, historical fiction’s escapism, family saga’s emotional intensity, the allegory of fairy tales, pretty much everything magical realism does, and literary fiction’s devotion to language. I read all over the map, so it only made sense to try to use what I like best in what I write. I find the idea of trapping something in a single genre to be more limiting to readers than helpful. The word genre also comes with a stigma. To me, labeling something as a particular genre is the best way to ensure that lots of people who might otherwise enjoy a book won’t find it. That’s a shame.

Sierra: What was your favorite chapter (or part) to write?

Erika:  I got to write some truly terrible weather in this book. Writing bad weather is a joy. When you’re writing terrible weather you know you’re writing something everyone can connect with, because we’ve all suffered through it. Weather spares no one. Essentially, huge storms or weather events are scenery chewing, going-for-the-Oscar moments. Late in The Book of Speculation I decimate a historic building, which was deeply satisfying in a way I shouldn’t examine too deeply.

Sierra:  Is anything in your book based on real life experiences or purely all imagination?

Erika:  The fictional town of Napawset draws heavily from the area around where I grew up. If you drive along Long Island’s North Shore after reading the book, it will feel achingly familiar. The contemporary storyline has emotional roots in my own experience of growing up in a small shore town. The 1790s narrative is entirely imagined, save for the historical details. Much as I wish that I’d run away with a traveling circus, I haven’t. I’d still like to though. Desperately.

Sierra: Is there any particular author or book that influenced you in any way either growing up or as an adult?

Erika:  Geek Love is the most influential book in my life. I picked it up in college and was totally smitten. To this day I haven’t encountered another book like it. The voice is fierce, unapologetic, and bawdy. Olympia is the boldest narrator—male or female—I’ve ever read. It’s impossible to read it without having a very strong opinion about it. That’s what I want from every book. I’ve been known to judge whether or not I can be friends with someone based on their opinion of Geek Love. I like to gift it to people and watch them squirm as they read.

Sierra: Do you ever experience writers block?

Erika:  All the time. There are plenty of days when I sit down and it just won’t happen. I swear a lot. I try to do other things, draw, read, take walks, anything that will get my brain moving away from feeling stuck. The antidote to writers block is change. And forgiveness. You have to forgive yourself for not being brilliant. That said, working on those two things is as difficult as the writing process itself.

Sierra: Is there an author that you would really like to meet?

Erika:  I’d very much like to meet Kirsty Logan. The Gracekeepers was recently published and it’s perfect. I’d love to be able to tell her that in person. In my imagined meeting there is tea, and we get to talk about folklore, fairy tales, and trashy television. Sadly, there’s a large ocean preventing that meeting.

Sierra: Will you have a new book coming out soon? If so, can you tell us about it?

Erika:  I’m in the very early stages of my next book. I can tell you that I’m exploring concepts of time, that it’s set in Florida, and it revolves around a young girl and science. Everything else will shift as I go. Books have a way of turning themselves inside out as you write them.

Sierra: If you could go back and do it all over again, is there any aspect of your first novel or getting it published that you would change?

Erika:  I wish I could have worried less. It’s so easy to become neurotic during editing and prepublication. I wore myself out with worry. During revisions, editing, and the period before launch you get these intense fears that you’re letting people down. It’s easy to lose sight of the fact that your book isn’t just yours anymore. It belongs to you, and everyone who works with you. The sooner it becomes less me and more we, the better.

Sierra: Do you have any advice to give to aspiring writers?

Erika:  Get off the computer and write longhand when you can. You’ll worry less and write more. You’ll edit when you type it up later. If you write longhand, you’re far less likely to lose a draft to a ham dinner colliding with a keyboard.

Sierra: Is there anything you would like to say to your readers and fans?

Erika:  Thank you. May you all one day write books and have people be as kind to you as they’ve been to me. It’s humbling, and I’m profoundly grateful.