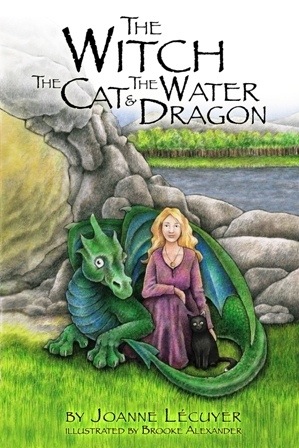 This is the sequel to The Witch, The Cat & The Egg, which I reviewed a few months ago! Joanne LeCuyer is a phenomenal children’s book author. As I’ve said before, I think one of the reasons I love her books so much are the illustrations that depict the stories to a “T”!

If you have read the first book, you will remember the young witch named Juliane. She had found a magical egg that she was to carry this egg across the forest. She had no idea what kind of egg this was. The egg has now hatched and you wouldn’t ever guess what it was! As the egg hatches, she soon discovers that she has been entrusted to guide the LAST magical water dragon.

She does her best to make sure that that everyone gets through the forest as safely as possible but something dark is coming and Juliane has to muster up courage and rely on her friendships to face the unknown. She will do whatever she can to save the magic and the magical forest of Ennyar. Although she has an unsettling vision at the end of the book, I know that Joanne has something up her sleeve for a third book for this MAGICAL series!!