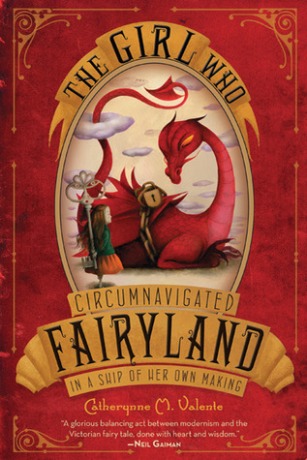 Of course not.  No one is chosen.  Not ever.  Not in the real world.  You chose to climb out of your window and ride on a Leopard.  You chose to trade your shadow for a child’s life.  You chose not to let the Marquess hurt your friends – you chose to smash her cages!  You chose to face your own death, not to balk at a great sea to cross and no ship to cross it in.  And twice now, you have chosen not to go home when you might have, if only you abandoned your friends.  You are not the chosen one, September.  Fairyland did not choose you – you chose yourself.  You could have had a lovely holiday in Fairyland and never met the Marquess, never worried yourself with local politics, had a romp with a few brownies and gone home with enough memories for a lifetime’s worth of novels.  But you didn’t.  You chose.  You chose it all.  Just like you chose your path on the beach: to lose your heart is not a path for the faint and fainting.

This is a story that starts in Omaha, NE.  Have you ever wanted to travel out of your window and ride upon a magical flying leopard to the gates of Fairyland? This just so happened to a little girl named September, who has read a great number of books and is a little on the heartless side. September is a brave and troublesome child with an eye to adventure who’s quite willing to hop out her window and follow the Green Wind to Fairyland, atop the Leopard of Little Breezes. There, she accepts a mission of import from some witches, befriends a Wyverary (his mother was a wyvern and his father was a library, and he sort of steals the book), develops a more complicated relationship with her shadow than is at all usual, and, well, so forth. She matches wits and swords (eh, sort of) with the wicked Marquess, who has a very fine hat and is a leading cause of harrowing quests. If that makes sense to you, you’re entirely my sort of person!

I would recommend this book if you would like a taste of adventure!  The way everything is described to minute detail, makes you feel as if you are flying on the back of a Wyverary along side September.  There is a second book that I am sure to read for September’s adventures do not end here!